The following data is based on collecting syslog data from some of the Linux hosts on one /24 subnet at a major U.S. university for 12 consecutive months. None of the hosts were intended as "honeypot" systems, they were all in laboratory use for a mixture of compute service and desktop use.

Not all systems were contributing syslog data throughout the period. Some joined the project laters, others had their operating systems re-installed by graduate students who did not always reconfigure the local syslog service.

The below table includes links to the reports, click on a month name if you want to see a rather large detailed report.

Each monthly report starts with a table ranking the attacking hosts in decreasing order of number of attacks detected. Then a large table shows a summary of the set of attacks from one host. The attack descriptions are in order of their start time. Here is one early example from October:

The attacking host was at IP address 71.170.120.217. A DNS PTR lookup sucessfully resolved that to the fully-qualified domain name pool-71-170-120-217.dllstx.fios.verizon.net, and in case that failed as it frequently did, a whois lookup was also performed on the IP address.

That attack hit two target hosts, ipanema and copacabana, listed in order of when each part of the attack started.

This was a multi-threaded vertical attack, based on the almost completely overlapping periods. The attack made 15 guesses for the root password, 1 guess each for the passwords of 13 accounts that happened to exist on the system, and a total of 140 guesses for the passwords of 120 accounts that did not exist. The precise sequence of guesses is as follows, with root marked in red, existing accounts marked in yellow, and the remaining invalid accounts marked in green.

As these types of attack go, this one was rather aggressive with two guesses per second on each target host.

The opposite extreme of timing appears to occur in the very next attack sequence captured, coming from Jiangsu Province in the People's Republic of China.

This appears to be an unusually subtle attack, spread out over one week making just 24 guesses on one target and 14 on another. That means about 6.2 hours between guesses on target ipanema and about 11 hours on target copacabana.

The sequences appeared to start almost ten minutes apart and continue for a week, indicating another multi-threaded vertical attack, but then stopping within one second. I guessed that the attacking host was shut down then or the attack process otherwise killed off. 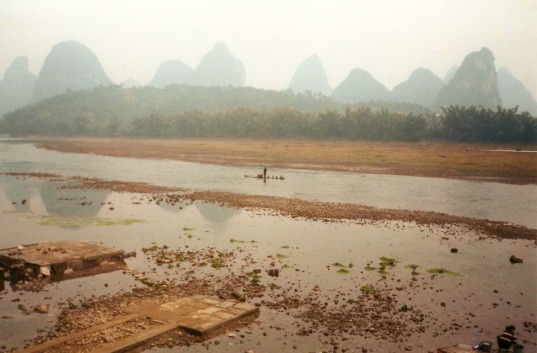 A cormorant fisherman on the Li River at Yangshuo, in south-eastern China, the source of so many of these attacks.

One of the early stages of log analysis was re-designed, to detect and separate different attacks from the same attacking host against the same target within one general period of time. Investigation indicated that guesses within one attack sequence occur within 10 seconds of each other, while distinct attack sequences from one attacking host as noticed so far have been separated by a few days. An arbitrary threshold of 300 seconds (5 minutes) was found useful to detect the start of a new sequence.

Once the sequences were separated, their significant differences were obvious. They were all based on the small set {admin, guest, mysql, test, webmaster}, but the sequences varied in length, order, and members:

Moving on into October, here is the first instance in these logs of what will become a familiar pattern:

Another multi-threaded vertical attack, not overly aggressive on any one host. A period of 3.5 to 4 seconds per guess seems to be pretty typical across all the attacks logged on this set of targets.

The interesting feature of this attack is the sequence of accounts guessed:
test guest admin admin user root root root test
That sequence had shown up again and again, and was the original motivation for the investigation resulting in this collection of web pages! Here are the instances of the "9/5" attack seen just in the first four months of data collection. With the exception of the attack on November 5, these attacks were identical — multi-threaded vertical attacks with one guess per target every 3 to 4 seconds, guessing passwords for identical sequences of logins.

A relatively simple attack like this "9/5" sequence can be noticed by simply looking at a table summarizing attacks. The problem is that many times the attacks are very similar but they are not identical. Here is an example of that phenomenon in an attack from Korea:

As usual, a multi-threaded vertical attack. It's interesting that two of these three started within one second while the third started 14 seconds later. I would guess that many other threads were started during that time, attacking other targets not observed in this syslog collection.

Notice that the first two threads terminated early. Not simultaneously, which would have suggested that the attacking host had been shut down or the attack processes all killed. The longer attack against target xoanon continued for about five minutes more.

Based on Observations So Far, What We Should Expect:

Many (but not all) attacks are multi-threaded vertical scans.

Sequences against targets may be identical, but frequently one target list terminates early.

Less frequently, we may see guesses skipped within the list.

So, we are looking to discover clusters of similar lists. They will be highly similar, possibly identical, at least to some point. Members of a cluster likely terminate or skip entries at different positions in the sequence.

To The Security Page