This page is part of the Availability cybersecurity collection

Google and Arbor have built a live all-Internet visualization of DDoS attacks. Also see Gizmodo's description of the tool. The page certainly catches your attention, although you can't really conclude much at all from looking at it. And, it's very resource hungry, close the browser tab when you're done.

DDoS is awfully hard to fight because you can't tell where it's really coming from. The very short description of the amplification type of attack is:

These traffic graphs are from a victim organization that had all three of their GigE ISP links completely saturated with an NTP amplification attack. 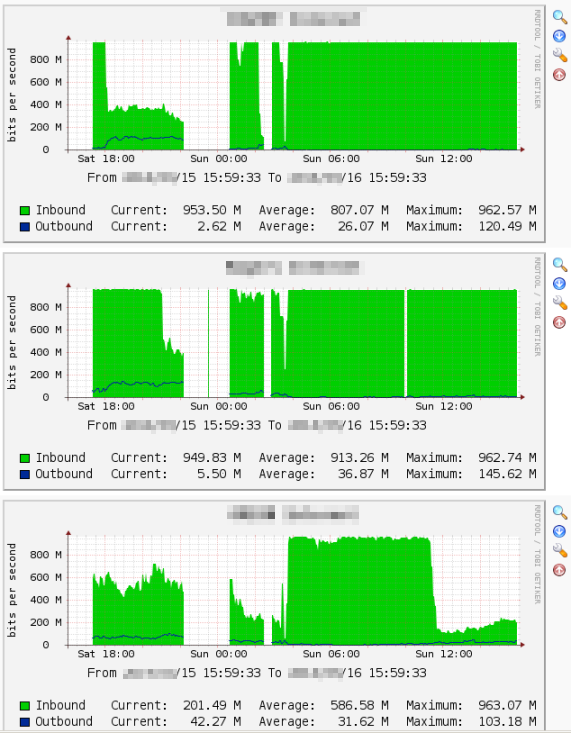 The forged packets were from UDP ports 80 and 443, so the amplified flood was directed to those ports. Only one ISP would implement an ACL to block UDP/80 and UDP/443 to them, the other two would only blackhole the six IP addresses being attacked. As two of those blackholed IP addresses were DNS servers, they could no longer talk to the root servers or any other DNS servers and so external name resolution was completely broken.

Another organization I talked to was cut off when 3 Gbps of NTP traffic was directed at their 1 Gbps ISP link.

For good explanations of DDoS attacks in more detail see Cloudflare's introductory paper:
Understanding and mitigating NTP-based DDoS attacks
and the more detailed and specific
Technical Details Behind a 400Gbps NTP Amplification DDoS Attack
Earlier, they wrote
Deep Inside a DNS Amplification DDoS Attack
and
The DDoS That Almost Broke the Internet
and before that and at a more basic level,
How to Launch a 65Gbps DDoS, and How to Stop One

SSDP, the Simple Service Discovery Protocol, was the top mechanism for DDoS attacks in early 2015.

The Register described a November 2015 attack on the DNS root servers, many of which were hit with 5 million queries per second.

The Krebs on Security site was knocked off the Internet by the Mirai botnet for almost four days in September 2016. See Brian Krebs' great investigation of who was behind the attack.

A DDoS attack on Dyn, a DNS provider, started at 0710 EDT on 21 October 2016. The attack used a botnet of "Internet of Things" devices including cameras, surveillance cameras, baby monitors, home routers, and other devices. The result cut off access to many popular web sites, especially from the eastern U.S.

The botnet was made up of devices based on components from Hangzhou Xiongmai Technology. The devices use well-known Telnet passwords as listed here. They are "white label" goods, produced by an unbranded company for third-party companies. The original manufacturer has no way of knowing which companies have rebranded and sold the insecure devices, preventing a recall.

Availability topics with their own pages:

On the general Availability page: