Russian, like most Slavic languages, is highly inflected. But what does inflection mean? An inflected word has been modified to indicate grammatical categories such as tense, mood, and voice for the verbs; case for the nouns, pronouns, and adjectives; and gender and number for all of those categories. The process is called conjugation for the verbs, and declension for the nouns, pronouns, and adjectives.

All of the Indo-European languages exhibit inflection to some degree, although the general trend has been for the extent of declension to decrease over time. Old English was much more inflected than modern English.

Modern English usually adds –s to a noun to indicate plural number. One dog, several dogs. But there is no declension of adjectives, no indication of case for the nouns, and modern English has no grammatical gender outside the pronouns. You say:

Declension for case in English is limited to the pronouns:

Old English was much more inflected. Middle English and Modern English have lost more and more inflection, simplifying along the way. This trend is common across the Indo-European family of languages, with the exception of the Slavic languages. Bulgarian and Macedonian have lost most of the declension of adjectives and nouns, but otherwise the Slavic languages remain highly inflected.

Nouns, pronouns, and adjectives decline through six cases in Russian. These analogies show that English has mostly lost case inflection. Also, Russian has no indefinite or definite articles (a, an, the):

Accusative — direct object:
I see the black dog.
The dog sees me.

Genitive — "of" or possessive:
The bark of the black dog is loud.
This is my dog.

Prepositional — in, on, under:
The black dog is in the large house.
The dog is sitting on me.

Dative — indirect object:
Give the water to the black dog.
The dog brings the ball to me.

Instrumental — the means by which the subject accomplishes the action:
My sled is pulled by black dogs.
Pasternak was an author, this book was written by him.

Russian verbs are conjugated to indicate number and person. As this table of English analogies reminds us, Modern English has lost the distinction between singular and plural second person pronoun with the disappearance of the singular thee/thou.

The verbs indicate tense in a simple system of past, present, and future.

There is also aspect, perfective and imperfective. Imperfective forms indicate that something was (or is, or will be) going on. It's not especially important to indicate if it was completed or not, the point is the ongoing activity:
I was painting the house.
I was going to town.
I listen to music while I work.
The professor will talk.

With the perfective form, the important point is that the act definitely was (or will be) completed.
I painted the house.
I went to town.
I heard the music.
The professor will announce the schedule.

Verbs can be transitive, taking a direct object — see, said — or intransitive, not acting on specific things — walk, talk.

Exceptions to the nominative case endings listed above:

There are a few masculine nouns ending in -а/я. These are mostly:

Nouns ending in -ь can be either masculine or feminine:

There are just ten neuter nouns ending in -мя, the most common are имя or "name", and время or "time".

Exceptions to the genitive case endings listed above:

Exceptions to the usual logic about gender include the handful of animate neuter nouns, which are categories rather than specific entities: дитя or child, животное or animal, существо or creature, божество or divinity, ничтожество or nonentity (when used about a person), and zoological categories such as млекопитающее or mammal, пресмыкающееся or reptile, and so on.

As an adjective, "what" is какой and "which" is который. They decline like adjectives.

These possessive pronouns do not decline:
his = его
her = её
their = их 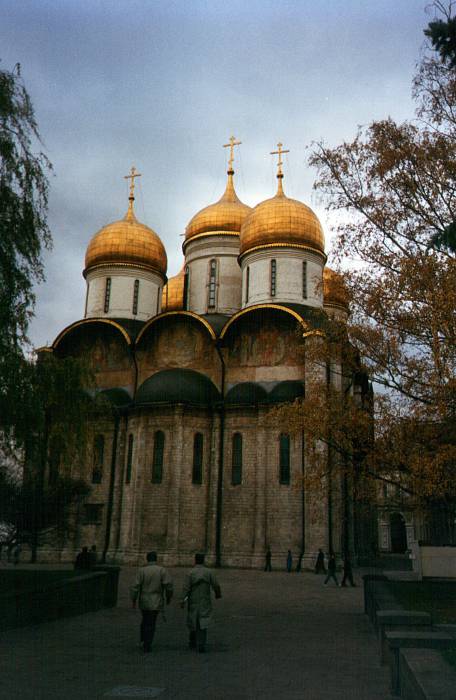 Cathedral inside the Moscow Kremlin. Click here for more pictures from Russia.

Verbs ending in -ти are exceptions, and do not generalize easily. See a detailed grammar or table of verb endings.

Use the future tense of быть with the infinitive of the main verb.

This page is intended for my use as a simple set of tables. For real answers, see:

The New Penguin Russian Course: A Complete Course for Beginners — Readable, it can answer my questions or remind me what I've forgotten.

A Comprehensive Russian Grammar — Far more than I will ever know...