Here are my suggestions for preparing for the CompTIA Security+ exam. I have tried to compress my suggestions down as much as possible. Hopefully they can be succinct and thought-provoking like koans. Maybe the temple pictures can help.

How to prepare for, and pass, certification exams Understand the test. Realize that the test does not try to measure if you are a skilled practitioner. The test has to do with communication between managers and technical experts. It's a vocabulary test to see if you can use the right words when one party in the conversation doesn't necessarily know all that much about the topic.

Some very distinctive terms, phrases, and sentences described below can help you easily spot correct choices on the test. 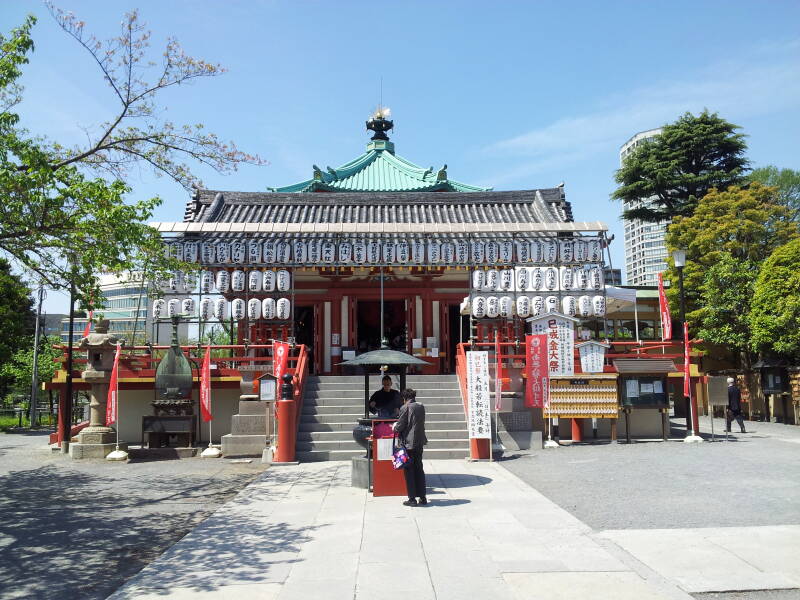 The Exam as Ritual

I imagine that a safe at CompTIA headquarters contains a book made up of a few hundred sentences, plus "Memorize this table of TCP and UDP port numbers", plus "we assume you know these parts of Network+". If you could memorize that book of sentences, like memorizing some ritual, you would know the answers to almost all of the questions. I know the exact form of some of those sentences, and distinctive phrases out of others. For example:

AES is the best symmetric cipher.

Kerberos is the best single-sign-on system.

Some have two parts.

It can be helpful to know a little of the background:

Symmetric ciphers should be used on data. (Because they are efficient, and data can be large)

Asymmetric ciphers protect the negotiations and keys. (That is, they do the endpoint authentications and set up symmetric session keys)

These aren't necessarily the answers themselves, but guidance for dealing with the exam questions.

A mile wide and an inch deep, go no deeper.

Pick the simple answer for the common case. No scenario is for you, it's for the mythical test-taker.

Reality helps with concepts, but not specifics.

He who says "At work we must do X and Y so that Z can then happen" has strayed from the path of wisdom.

He who says "I can imagine a scenario where X and then Y could lead to Z" has gone even further off the path.

When you are told the name, job title, department, and the often-irrelevant current task of every player in a little story, read past those quickly. They're there to slow you down.

CompTIA Wants You To Know Some Specific Sayings

I don't know exactly what CompTIA means by some of these distinctive phrases. But that doesn't matter because all I need to know is that these are the right answers.

"Acceptable Use Policy is enforced with user education and content/URL filtering."
"Code of Ethics is a set of minimum expected behaviors."
"When a manager wants to introduce a new application, tell them to look at the risk analysis."
"Threat modeling predicts the most likely points of attack."
"MITM and replay attacks start by sniffing the network with a protocol analyzer."
"Vulnerability scanners are passive because they don't send exploits."
"Clients must use proxies or NAT to access the Internet."
"Fuzzing sends sequential or random data to a target."
"Check access logs daily."
"Highly complex computer-generated passwords are bad."
"Logs and audits enforce accountability."
"Audits attempt to reconcile activity against a standard (policy), and mysterious anomalies are likely to be problems."
"Quantitative" or "a metric" means numbers, and that's the best analysis. But for human behavior we're stuck with qualitative assessment.
"Disposal" means destroy the media, "sanitize" means wipe it for re-use.
"Disaster Recovery" means "as the hurricane is moving away."
"Business Continuity" means "3-4 days after and continuing from there."
"Contingency Planning" is for one very specific problem.
"The first step in risk assessment is an asset inventory."
"The first step in Disaster Recovery Planning is a Business Impact Analysis."
"Succession planning" is corrective.
"Job rotation" is preventative.
"Enforced vacation" is detective.
"Succession planning" is why Gerald Ford ended up as the President.
"Job rotation" might have kept Nixon and Agnew in office.
Spoofing is when a host pretends to be another host,
Impersonation is when a person pretends to be another person.
Cold sites require over one week to start.
Warm sites can start in under a week.
Hot sites are always ready right now, so they're expensive.
"Armored viruses resist analysis"
"Malicious invulnerable add-ons are software added to browsers to test the system with spyware, botnet software, etc."
"You cannot identify a zero-day attack. Except you can identify them with fuzzing, honeypots, host IPS, and network IPS. Network IPS can identify and stop in-progress zero-day attacks."
"An APT cannot be identified. Except you can identify one with host configuration baselines."
"Use a safe or vault to protect HSM, TPM, and portable media with signing keys and other highly sensitive data. Lock wireless access points inside rack cabinets (nice Faraday cage)."

Both behavior-based and anomaly-based IDS must observe for a while to learn the local baseline. They mention "exceptions or broken protocol rules" when they're talking about anomaly-based.

Privilege escalation is used to mean two very different things, use the context to figure out which one they're talking about:

When they ask "What would be the very best way...", they are often implying "...if expense and complexity don't matter."
For example: diesel generators, HSMs, Kerberos, biometric door locks, and SELinux in full enforcing mode. Kerberos and SELinux are free software, but complex to manage. The others cost a lot of money.

If you can drawn your own versions of how some fundamental cryptographic operations work, you will easily answer many of the exam questions. If you can't, you're likely to fail the exam. Look at my diagrams, and draw your own. You need to know how all these work:

You need to know a little about SAML for Security+, here's how it works. 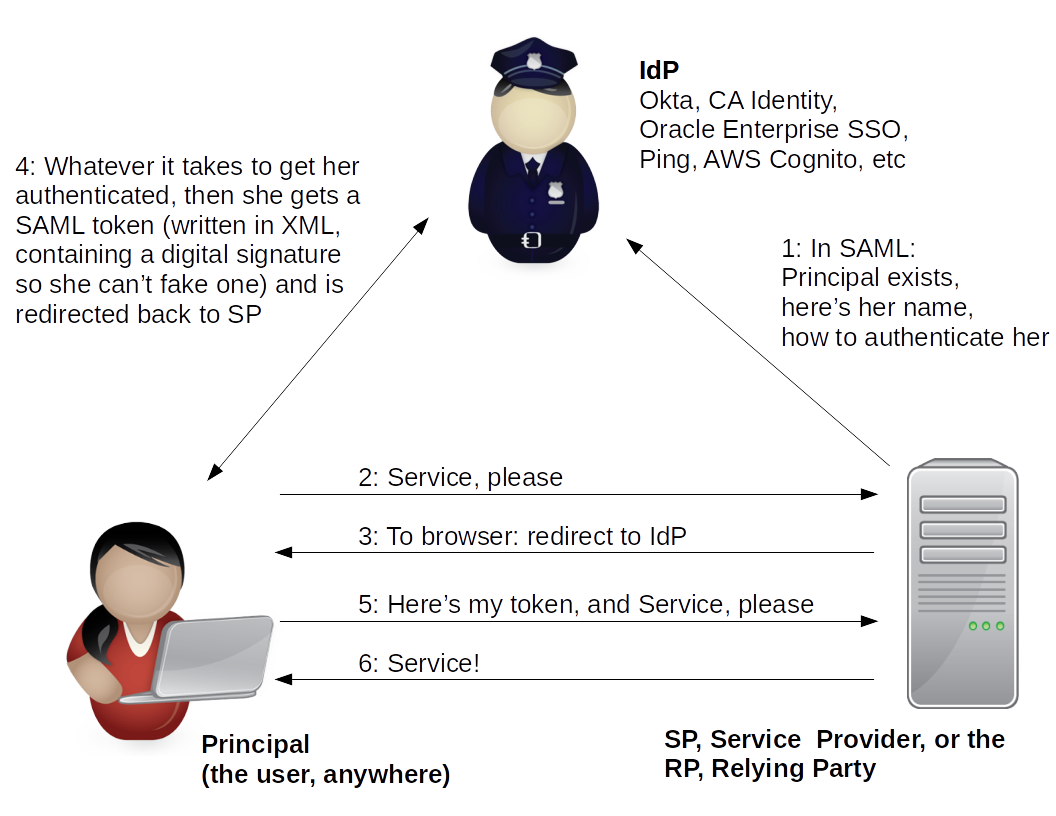 Shibboleth is based on SAML, it works the same way, but SAML is used by companies with for-profit identity providers. Shibboleth is much more about academia using it for themselves.

What Color Is The Sky in the CompTIA Universe?

CompTIA consistently insists that a number of things are not the way they are in the real world. Shrug and mark the correct answer.

All routers have ACLs and all are default deny. Always.

The entire Internet contains nothing but Windows desktops, plus a few Windows servers.
Except for once in a while Linux appears out of the blue: ssh / scp / sftp, root, SELinux (a.k.a. NSA Security-Enhanced Linux), /etc/passwd and /etc/shadow, plus the above about file system tampering.

CompTIA Likes to Confuse You

Here are some confusingly similar or overlapping topics ideal for setting up tricky multiple-choice questions:

OTP stands for both One-Time Password (at first login you must change it) and One-Time Pad (the only truly secure cipher). MAC stands for three very different security concepts.

With lost phone questions, are we trying to track down and recover the hardware asset, or remotely wipe the data, or keep the finder from making calls on our bill? Or some combination of those goals?

This isn't trickiness, but many questions are effectively two or more questions in one. For example:

Julie, a left-handed Episcopalian network engineer in the software development department, needs to encrypt some large files containing sensitive customer data in order to fulfill compliance requirements. Her manager is emphasizing the importance because these are medical records. What should she use?
RSA
AES
DES
ECC

Once you have waded through the intentionally distracting and time-wasting clutter, you have the real question: How to encrypt large data sets? First part: The general answer is Symmetric ciphers but that isn't a choice. Second part: Now you have to look through the list for examples of those: AES and DES. Third part: Realize that AES is (by far) the better choice.

What about a study book?

The least bad one is the CompTIA Security+ Study Guide: Exam SY0-601 by Sybex. It's based on CompTIA's material, but that means that it only tells you some of the truth. I haven't noticed anything in that book that contradicts what they want you to say on the test, but:

So you will waste some time, energy, and memory on things you don't really need to know, and you won't have seen some of the topics you need to know. And this is the best book available...

What About Other On-Line Practice Exams?

How to prepare for, and pass, certification exams

See my page about preparing for certification exams for some suggestions and dire warnings about these.

Be aware that CompTIA pretends that one major release of their exam is a long-term static document. They say that after over 3 years of the SY0-301 exam being the Security+ exam, in a form that never changed, the SY0-401 exam appeared and suddenly was the only form of the exam for the following four and a half years.

They release a major upgrade, such as SY0-301 to SY0-401, to SY0-501, every 3 to almost 5 years. But during that 3 to nearly 5 years of a given exam, it evolves through a series of entirely unannounced and unacknowledged updates.

My rant about how horribly bad the SY0-401 exam was

These "mid-course adjustments" may be minor tweaks to what the exam covers, or they may be more significant. As a general rule, a given exam major release gets progressively worse during the time CompTIA says it's "the" current version.

SY0-501 was a much better exam than its predecessor, at least when it first came out.

See my detailed rant if you want to know just how bad the SY0-401 exam was. You had to memorize historical trivia that hadn't mattered for over two decades, and much of the rest of the exam required you to recite fiction.

Now you know a little more about how to think about the awful questions on this test.

You're on your way to making your own one-page crib sheet. The smaller your study guide or crib sheet becomes, the more you already know and the less you have to be reminded of.

Re-do the Short Quiz A versions to see how it's going. Then read sections of the textbook or look back through the acronyms or whatever as needed. When Short Quiz A becomes too easy, try Short Quiz B. Then "All Questions" for that domain.

Let us know how you did! Especially let us know if there were any surprises on the exam, any questions on topics we don't yet realize we need to cover.

To the Cybersecurity Page