Elliptic Curves Are Not Ellipses

Elliptic curves are not ellipses. An ellipse is a closed curve. A circle is a special case of an ellipse. Ellipses are pretty simple.

An elliptic curve, on the other hand, is a more complex smoothly curving shape. Potentially much more complex.

You can do operations of addition, negation, and multiplication on points on an elliptic curve. Those operations have exactly the same properties as they do with integers. But they work very differently.

Calculating powers, or chained multiplications, is easy and fast. But reversing that, calculating a discrete logarithm, is impractically difficult. There's your trapdoor.

The big two things to see here are the graphical illustration of addition on an elliptic curve, and how to calculate a set of points on a curve.

Let's see how those work.

I'm using MathJax to do math within HTML.

For me the first big epiphany was seeing the graphical version of addition on an elliptic curve and how much it differed from what I had naïvely expected. The second was figuring out how to do the modulo arithmetic to generate a set of curve points.

However, we're looking to do cryptography, not to explore abstract mathematics.

Below are some example curves for various integer values of \(a\) and \(b\). Notice the shape where they're both zero, when the determinant would also be zero. It has a cusp, where the curve goes into a corner and reverses direction. Other combinations of \(a\) and \(b\) yielding a determinant of zero generate a curve that crosses over themself. To be a real elliptic curve, the discriminant must be non-zero. No cusps, no crossings. A curve might be in one or two parts, if its discriminant is negative or positive, respectively. We see two-part curves here for \( a = 2 \) and \( b = \{-1, 0, 1\} \), and for \( a = 1 \) and \( b = 0 \). 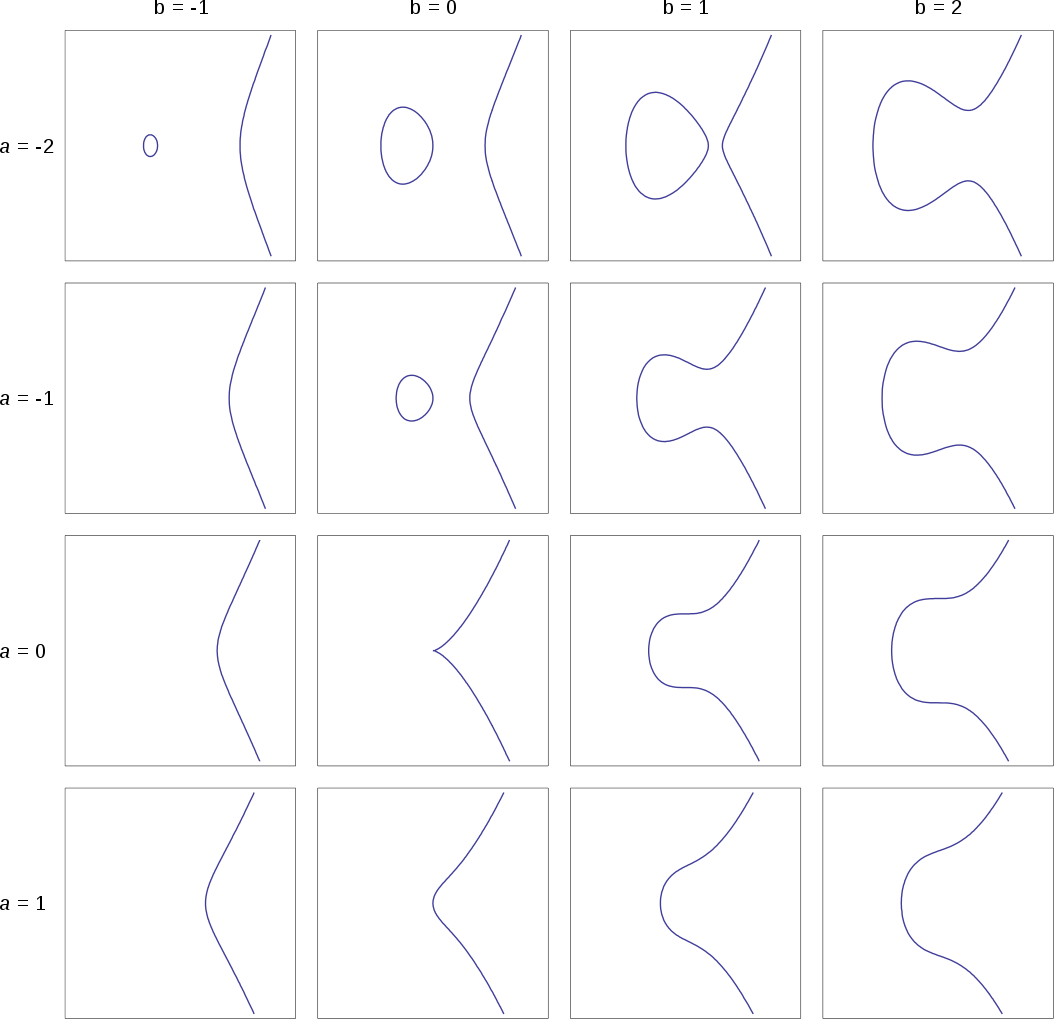 Besides, where we're headed there is nothing but integers.

There are a few basic concepts of arithmetic that you should have learned in your first year or two of school. They can be dressed up with fancy names, but the concepts or rules are very simple.

Let's say that all we have is addition and negation. Here are the rules with formal names, and some with simpler explanations. I'm using a fancy script 𝒪 to represent zero, as you will see that in more advanced discussion of elliptic-curve cryptography.

The Same Rules Apply On Curves

This is where overly formal treatments would tell you that E forms an Abelian group, and a finite set of points on the curve is a Galois field. Even though both are true, they aren't helpful here.

We can say that if E is the set of points on some elliptic curve, then we can do arithmetic on those points. And, the above rules apply.

What we're about to see is that we do arithmetic on those curve points in a way that I did not expect. Each point has some (x,y) coordinates, and I expected arithmetic on those points to be like vector addition, or dot products, or cross products. Not at all! But the important thing is that the same rules and relationships apply.

Seeing This In Pictures 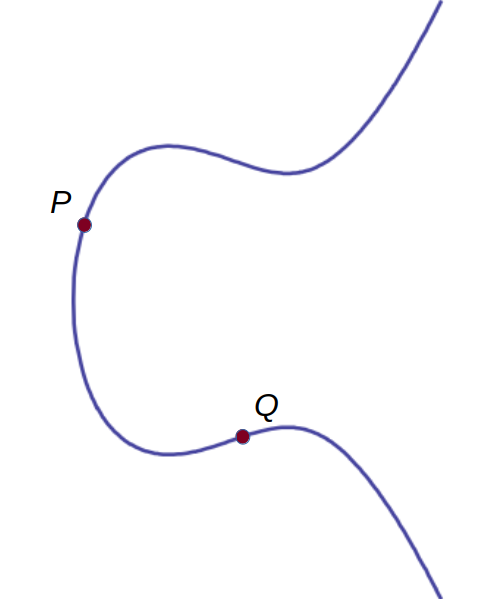 Here's where it starts to get a little weird. 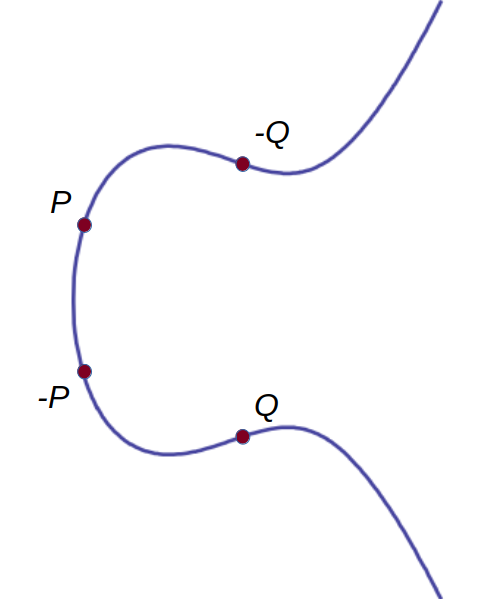 Most of the time, a line through two points on an elliptic curve also intersects the curve at a third point.

Most of the time. There are two exceptions. One is a vertical line, which continues up and down to infinity with no third intersection.

Notice: "to infinity with no third intersection."

So, "point 𝒪" means there's no such point, even infinitely far up and down the vertical line. OK.

Here's where it gets more weird, or at least more unexpected, at least for me. 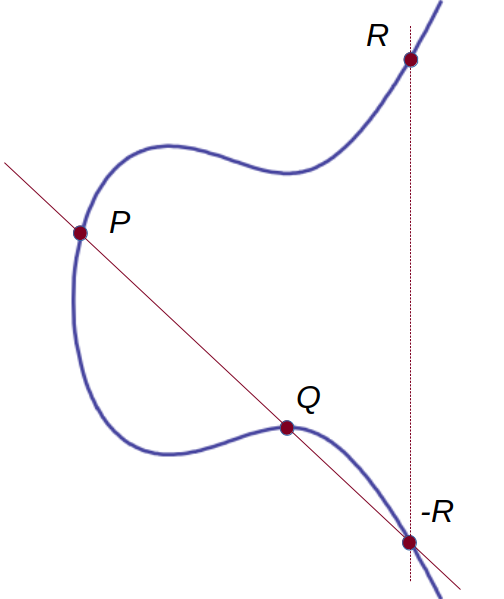 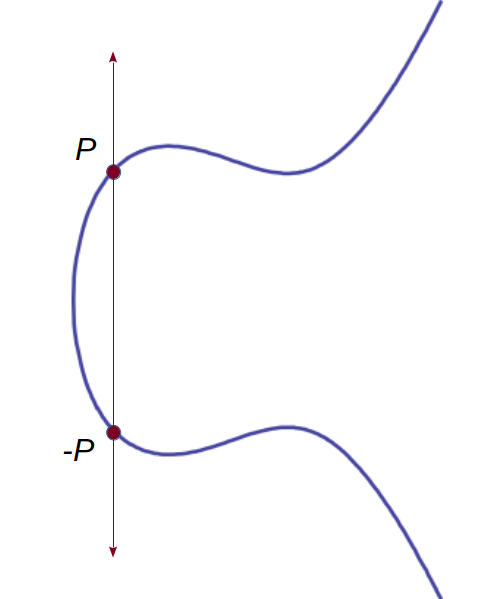 One last piece we need is doubling, or multiplying by 2. 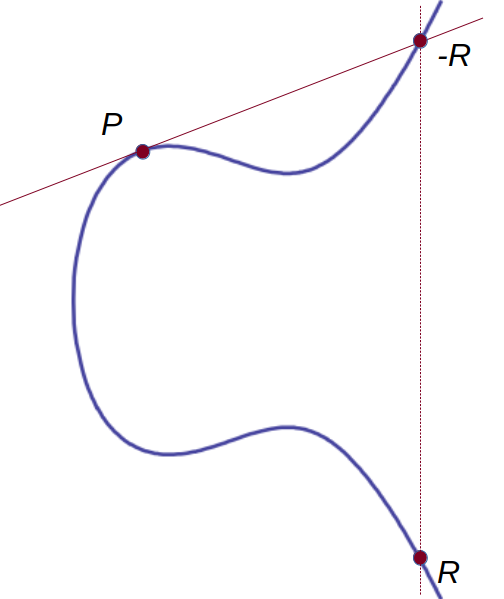 The Algebra — Feel Free To Skip

The good news is that the algebra for calculating the coordinates of the answer has already been worked out for us.

The even better news is that we won't need to get into those details! If you want, feel free to jump ahead to the last page.

Jump to:
Points on a Curve

But to be complete, here is how to calculate the coordinates. No need to draw lines and measure intersections. Just plug the coordinates of P and Q into some fairly simple equations.

That's it for the algebra formulas! On to the last page:

Points on a curve