So you have installed OpenBSD on your system, presumably because you are interested in its high security, although maybe because you would like an operating system that is even more efficient on low-end hardware than Linux while still providing a rich and powerful user environment. And see my page on installing and running OpenBSD on a Dell laptop for details on getting the operating system into place.

802.11 refers to the LANs considered by group number 11, the microwave wireless networks. "Wi-Fi" as it's generally called.

WEP is an early attempt at securing wireless LAN connections. It is rather insecure and should not be relied upon.

WEP2 and WPA were interim standards, they also should be avoided.

WPA2, also known as 802.11i, is the best available standard for wireless security. WPA2 uses:

AES (Advanced Encryption Standard) cipher operating in CCMP mode. That's Counter Mode CBC-MAC, or to complete, Counter Mode Cipher Block Chaining Message Authentication Code Protocol. The short version is that AES-CCMP is the best known way to do it, so that's what WPA2 does!

Short-term session keys are automatically negotiated and maintained with TKIP (Temporal Key Integrity Protocol). Every node to node connection uses a randomly generated 256-bit key, and either node can decide that enough time or ciphertext has passed that a new session key should be automatically chosen.

WPA with PSK (Pre-Shared Key) uses AES and a fixed key which you must manually configure.

WPA2-Enterprise refers to WPA2 with a Radius server for host-to-host authentication with digital certificates. WPA2-Enterprise is the best choice for organizations with the infrastructure, including network engineer skill, to maintain a RADIUS server.

Kernel Drivers and WPA2 on OpenBSD

You must use a wireless card for which there is support for WPA2 both in the hardware and in the OpenBSD kernel module. This will require you to figure out which kernel driver is appropriate for the card. This is not nearly as hard as it sounds!

First, look at the end of the kernel ring buffer:

For the two wireless cards that I own, I see this:

OpenBSD notebook in use at the National Archives in Washington DC.

So, the Netgear MA521 card was recognized as device rtw0 and therefore the rtw kernel driver recognized it. The manual page for rtw says that this uses the Realtek RTL8180L chipset and provides a list of cards known to be based on that chipset.

Unfortunately, the rtw driver does not support WPA2, presumably because the manufacturer has not provided the needed details to the open source community. It does support WEP, but as the manual page warns:   It is strongly recommended that WEP not be used as the sole mechanism to secure wireless communication, due to serious weaknesses in it.

And, WPA2 is supported by the Atheros driver!

Atheros supports the open source community, which in turn helps Atheros sell hardware by writing drivers of interest to security-conscious administrators. See Atheros' site for an up to date list of products using these chips.

Configuring an Atheros WLAN card for WPA2 from the command line

What's going on here? Let's try this one step at a time. First, run that embedded wpa-psk command by itself:

That big and random-looking string is a 256-bit pre-shared key based on an SSID and the passphrase. The SSID must be from 1 to 32 octets, and the passphrase must be a sequence of 8 to 63 ASCII encoded characters. The wpa-psk command applies the Password-Based Key Derivation Function 2 (PBKDF2) in which the passphrase is hashed 4096 times using the HMAC-SHA1 cryptographic hash function.

If the passphrase contains any special characters (white space, or most any punctuation mark), the passphrase should be hidden from the shell with appropriate quoting or escape characters. The third and fourth examples show that there are multiple ways of accomplishing this:

So, going back to our simple example, the part within the backquotes executes first. Its output replaces the backquoted string, so it is as if you had really typed:

You could add an IP address, the word netmask, and the netmask to assign a static IP address. However, a notebook with a WLAN card usually means DHCP and you don't want to fuss too much with the details, so:

Configuring an Atheros WLAN card for automated boot with DHCP

You need a file named /etc/hostname.if where if is replaced with the interface name.

So, my example file /etc/hostname.ath0 will be used to configure interface ath0 when the network configuration script /etc/netstart runs.

If you need to specify any other parameters, you can do so:

It's pretty straightforward — just read the relevant manual page for the WLAN card kernel driver. But why did I first have to figure this out? 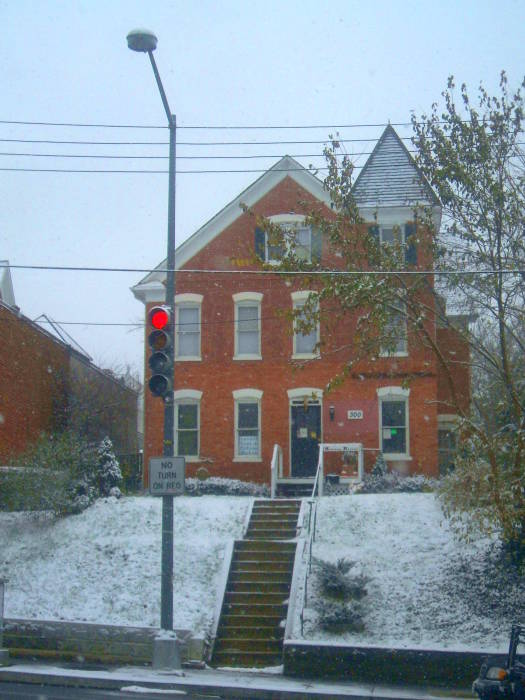 Hilltop Hostel in the snow. Much better network security than the typical hotel!

After doing a lot of traveling and having no trouble getting wireless networking up and running, I ran into a situation where I could not simply bring up the interface with DHCP and no authentication at all (the wide-open wireless networking in most hotels catering to business travelers, coffeeshops, and so on) or with the very weak WEP security.

Hey, this was a system that very casually required the much higher security of WPA2! Good for them! Where was this?

At the Hilltop Hostel in Washington D.C.

That's right — travellers from major corporations and supposedly security conscious government agencies stay at hotels and recklessly use the wide-open cleartext wireless. I know because I have run tools like Kismet and Wireshark while staying at those hotels (and being careful to do nothing myself except through an SSH or SSL tunnel).

But a hippie crash-pad where you pay $20 a night for a bed in a shared room uses WPA2. Good for the Hilltop, too bad for the rest.