I have been using a Dell Inspiron 1000. It has a 2.2 GHz Celeron CPU, originally with 256 MB RAM and a 38 GB disk. The Hitachi disk died after a little over a year, and I replaced it with a 120 GB Western Digital unit. I also upgraded the memory to 512 MB by adding a 256 MB DDR module, the maximum. It was fine with OpenBSD and just 256 MB, but performance of the KDE desktop improved with the upgrade. An amusing owner's review describes this as "The Ford Pinto of the laptop world circa 2004."

This replaces an HP OmniBook 2100 with a 200 MHz Pentium I, 96 MB of RAM, and a 5 GB disk. BSD doesn't need a lot of hardware! Much of the below also applied to the HP Omnibook.

And that replaced a Toshiba Satellite Pro 430CDS with a Pentium I, 32 MB of RAM, and a 1.3 GB disk. Much of the below was unneeded on that system, although I would never have tried to build Ethereal/Wireshark there!

I started on the Dell Inspiron 1000 by installing the 22 Feb 2005 snapshot of OpenBSD 3.6, due to perceived trouble with the 3.6 official. Now that it's done, I see that the 3.6 official should have worked just fine. And everything through version 4.8 has also been just fine.

You surely know about http://www.openbsd.org/, right? Unless you're just reading this for the parts that also apply to Linux... 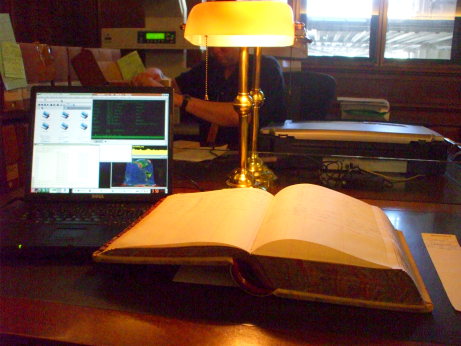 My Dell Inspiron on a research project at the U.S. National Archives with konqueror, konsole, xterm, and kworldclock running.

Good news — this seems to have been fixed starting with the OpenBSD 4.5 release! Hopefully you won't need the following fix, but I'll keep the explanation on this page just in case.

The system would not boot, it hung within the first 16-20 lines of output after the boot prompt. Reading the output and consulting Google revealed that it was because of problems with the automatic power management on the hardware platform. The provided Phoenix BIOS does not let me turn that off! Here's what I saw in the failed boot screen after the kernel loaded and detected the CPU and RAM:

While this page is mainly about running OpenBSD, this will also present a problem with some Linux kernels unless they are booted with the noapci option.

Fix for the boot failure

Starting with OpenBSD 4.1, you need to make some kernel settings. From the manual page for xf86(4):

So, if you want to run X on this platform, put the following into /etc/sysctl.conf and then reboot:

The biggest things to remember:

X should now be able to automatically figure out your hardware using its built-in short configuration. If that does not work, you might try this:

You can test your X setup by running a bare X server:

If it works, you will get the X background pattern and a X-shaped cursor. Kill the X server with:
<Ctrl><Alt><Backspace>
See below about setting up KDE and its display manager.

I wanted to use KDE, and had trouble getting it to run. The initial trick was to stop any running kdm process:

and then configure the KDM display manager:

With OpenBSD 3.8 came a move to KDE 3.4, and some profound keyboard problems. The short version is that the getty processes (which run login on the text virtual consoles) grab many of the TTY devices, /dev/ttyC[0-5]. The display manager should run on /dev/ttyC4 but it and the getty processes get into a race, the result of which is that the display manager does not have access to the keyboard on the virtual console where it is running.

Google reveals some discussion of this — one suggestion is to attempt to control either getty, kdm, or both, but that doesn't seem very promising. I figured out a kludge of a workaround based on these useful messages (which talk about the problem in Linux, but it's fairly analogous):
Message 1 Message 2 Message 3 Message 4

My fix is ugly: wait a few seconds to let the getty processes quit struggling for resources, then let the display manager come in and do its thing. I added a block like the following, either at the bottom of /etc/rc or /etc/rc.local, I didn't notice any difference in behavior:

SSH agents are a good thing. The problem is, KDE does not generally start one in the right way. You could try messing with the user's X configuration to get one started, but the best solution seems to be to just have KDE do it.

In KDE3 you modified the way startkde is called within /usr/local/share/config/kdm.

Things have changed in KDE4. The user's desktop environment is started by the shell script /usr/local/bin/startkde4. That path appears to be hardcoded into the KDE4 display manager kdm. Move that script to another file:

Then create a script in the old location that will start an SSH agent and have it start the KDE4 environment by calling the real script:

KDE and the Limit on Open Files

My experience has been that the Konqueror web browser will fail to load complex pages, especially if there is much already open on your desktop. This is because of the conservative limits OpenBSD places on user utilization of resouces.

If you are a csh/tcsh user:

If you are a bash user:

Strict! And see the other page on compiling and running Wireshark for another place where this causes trouble. My fix was as follows:

Did I Do All Work Required by Packages?

When you install a large number of packages with pkg_add you may see that several of them had messages about things you may need to do manually. But most of those messages have scrolled off the screen and you can't see them. You worry that you may be stuck with the wrong spell-check dictionary, paper size, and worse.

Ask to see those messages:

When I installed a bunch of packages on a *-current release, I would get unexpected error messages when I tried to run the binaries. They complained that they could not load shared libraries that had been installed. The fix:

If you are at all interested in software packages, you probably want to see my package management howto page!

I initially thought I had a problem with wireless, but no, it was because I was trying to bring up the wireless in an environment with no other wireless devices...

Using a USB-to-serial adaptor: For example, to talk to a Cisco switch or router console port. The device shows up in dmesg output after plugging it in:

The serial device is now /dev/ttyU0 if you are configuring minicom or similar.

And now to build some software....

See my other pages for details on how to build large software packages like:
Wireshark OpenCV OpenVAS Rainbow Crack