Staying out of the Weather

I woke up in Fukuoka, walked down the covered market street from the hostel to a convenience store, and got breakfast of o-nigiri and green tea.

I wasn't in a hurry to leave for Nagasaki, as hostel staff leave in the morning and often don't return until 1500 or even 1600. The train would take about two hours, and then there would be a streetcar ride and some walking in Nagasaki. So, I'll have my breakfast at the hostel, get packed, check out, and hang out there until about noon.

It was still raining when I was ready to go. I walked three blocks along the covered market street and went down into the subway station. I took the subway to the Hakata station, bought my ticket, bought lunch to take on the train, and found my train's platform.

I wasn't out in the weather between my bed in Fukuoka and when I exited the station in Nagasaki.

I was headed a short distance across Kyūshū, the south-eastern-most of Japan's four largest Home Islands.

At the Hakata Station in Fukuoka

I've got my ticket, it's in two parts. The top is the actual ticket, ¥2,810 for a trip from Hakata to Nagasaki, good for today or tomorrow.

The second part is below, ¥1,380 Limited Express supplement, good for today only.

The three types of non-Shinkansen trains run at roughly the same top speeds, but differ in how many station stops they make:

Now to buy some lunch to take on the train.

Mentaiko, also called たらこ or tarako, is popular in Kyūshū. It's salted cod roe, spiced with powdered red chile pepper. It might be in the intact skein straight out of the fish, or stuffed into a thin membrane. Mentaiko is the spicier version. Here they're graded by number of chile peppers.

Alaska pollock or walleye pollock is actually a species of cod. Its Korean name is myeongtae, and both Japanese and Russian use forms of that name. Pollock roe is икра минтая (or ikra mintaya) in Russian

Salmon roe, イクラ or ikura, borrows the Russian word for fish eggs. Here is salmon and salmon roe donburi, over a bowl of rice, at a lunch stand in the Ameya Yokocho district of Tōkyō. 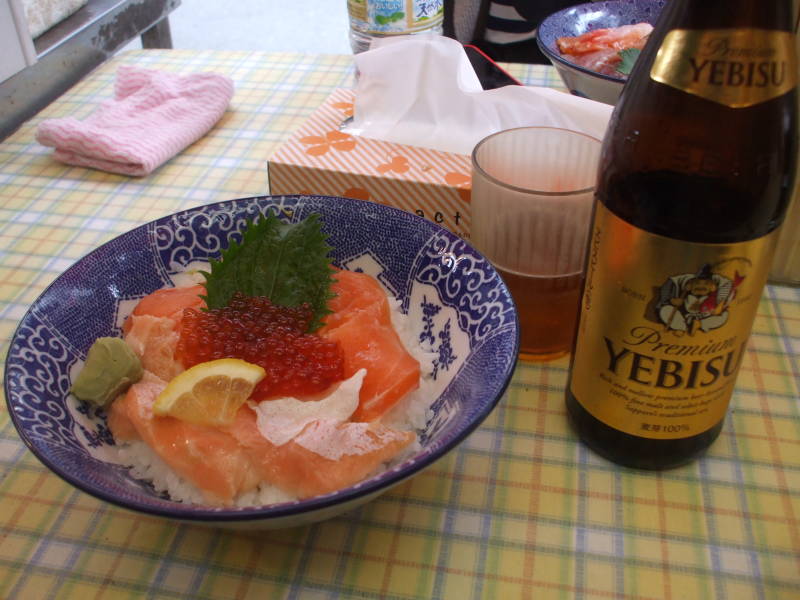 The schedule is initially intimidating.

Don't panic! The schedule board cycles through languages.

Kamome, in red at upper left, is the name of the Limited Express train between Hakata and Nagasaki. Track 4.

The train from Nagasaki is pulling in on track 4. It will start back soon, with me on board.

It's no Shinkansen, but it's nice inside and it moves at up to 130 km/h. It's a smoother ride than anything Amtrak runs in the U.S., including the top-of-the-line Acela between Washington and New York.

This is the 885 series equipment, running on overhead 20 kV AC power.

Unreserved seating, but there are plenty of choices on a weekday early afternoon.

This is a standard-class car, with 2×2 seating. The Green Car, requiring an additional supplement, has 1×2 seating, wider seats with thicker cushioning.

Example lunches are in the cases at the shops, you can order by number or by pointing.

The bottom of the lid holds a moist towel or oshibori, a napkin, and chopsticks or hashi.

This is べんとう or bentō, a boxed lunch. Ekiben is a term that might mean a bentō box sold at the train station.

Left to right in the front compartments: a slice of kamaboko, fish paste pressed into a loaf and sliced; okra tempura; fish tempura; something like a meatball; and pickled vegetable. Then a piece of broiled salmon toward the rear.

There's the salmon, and some vegetables beneath it.

Then across the back row is a colorful crustacean along with some more kamaboko and pickled vegetables. At right, fish meatballs and some sweet something or other.

The left side has rice in sushi-like lumps, with roasted sesame seeds.

I'm having a leisurely lunch as we roll past rice paddies and through tunnels. The Limited Express moves right along, but it has to follow a roundabout path from Fukuoka to Nagasaki.

Views from the Train

It was cloudy and raining with low clouds. The rail line stayed just above sea level but there were mountains all around. Kyūshū, like most of the rest of Japan, is mountainous. There were plenty of tunnels.

The last tunnel was the longest. We came out of it in the valley leading south to Nagasaki harbor. The passenger station is close to the waterfront. I would be staying in the smaller valley that leads off to the northeast of the harbor.

Portion of map from the Perry Castañeda Library Map Collection at the University of Texas.

I could get coffee from one of several vending machines in the station. Or yogurt. Or hot soup.

I went out into the light rain, my first time really outside all day.

I went up onto a network of passenger bridges that crossed above the parking lot, the streetcar station, and the main street.

I would take one of these streetcars to a stop just a few blocks from where I would be staying.

Everyone lines up, very orderly. You board at the rear, and pay as you get off at the front.

I've gotten out here, where the streetcar is about to turn off to the left. The place I'm staying is straight ahead, to the base of that hill mostly obscured by the low clouds, then a couple of blocks to the left.

Along the way there's a shop at a corner that's nothing but vending machines. That's a common business model.

The red says panfuretsuto arimasu. I have no idea what that means.

I was headed for Hostel Akari. It's along the Nakashima River, flowing from the northeast to the harbor.

The next day the weather was clear and I could see where I was. Nagasaki is in a branching network of mountain valleys leading back from the harbor. Two blocks to the right of where I am here, a steep slope starts up to a peak just over 200 meters high.

I'm headed to the building with the red banners, on the opposite side of the river just past the bridge.

I've crossed over, my destination is just ahead.

There's a temple across the river from the hostel. Most of these bridges date from the 17th century. They used to all be entryways to temples.

Here's the Akari hostel building. I asked if the building used to be a church. Unlike most of the rest of Japan, there are some churches in Nagasaki. The building is of an unusual design with a stained glass window at the front end of the top floor hallway.

No, they said, it had always been some sort of business. And above the ground floor, it was divided into small and medium sized rooms.

Here's my bunk. Four double bunks in a room with tatami mats. They all have curtains, as usual in Japan.

The shared toilet down the hall is the usual Japanese design. It has a triangular tank in the corner. The tank refills through the spigot at the top. So, you can wash your hands with the water that fills the tank. It's (lightly) grey-water flushing.

The rain has changed to mist, and the clouds have risen a little. But the 200 meter hill to the east is still mostly hidden.

One of the bridges over the Nakashima is called Meganebashi or the "Spectacles Bridge" because of the appearance of it and its reflection.

The first bridge was built here in 1634 by a Chinese monk living at Kofuku-ji Temple. It has been heavily damaged in flooding, but repaired and rebuilt with most of the original stones each time.

This narrow street crosses the busy Motofurukawa Street and becomes a shōtengai or covered shopping street.

I asked multiple times at the places I stayed, but never got an answer that satisfied me. Just what does Tax Free mean?

I always got a roundabout answer about the prices being low because there aren't taxes. But there are, look at this receipt. Well, yes, that's a tax but not really. Or it's low.

I soon concluded that "TAX FREE" means "low cost", and has nothing at all to do with the tax you and the store pay to the government.

This is an outpost of the popular Don Quixote chain. ドン   キホーテ or Don Kiho-te says the sign.

This is an odd list of food items. Confetti and hardtack, and high-quality cat food mixed in with the human food.

I exit the south end of the covered shopping market onto side streets.

That's the Local Bar across the way, where locals like to meet foreign travelers.

Get something with your drink. Maybe just nori, but something. As they say, "Don't be English."

Now back out to wander the side streets and back alleys.

I got dinner along the way, then stopped at this izakaya on the way back.

I'm having a (very) light snack with my ハイボール or haibōru, and my hashi or chopsticks have a hashioki or rest.

It's a classy joint. Don't be English.

Back to the Hostel

Businesses are still open, but it's time to head back to the hostel.

The bridges are nicely lit. There's my place, just beyond the bridge.

The above is specific to Nagasaki. Or maybe you want to explore other places in Japan.