Here are my notes on what changes when you upgrade from one major release of Red Hat Enterprise Linux, or was its clone CentOS, or its derivative Oracle Linux. In other words, how to upgrade from RHEL or CentOS or Oracle Linux 6 to 7 to 8 to 9.

Remember that it's not as if Red Hat is changing all of these things. Their installers and their graphical configuration tools, sure, those are the distribution's changes. But much of this is the result of the many underlying projects changing. So this collection of pages also applies to Oracle Linux, where the major release numbers 6, 7, 8, 9 largely align with RHEL and CentOS, and really to any distribution as its components have updated over the past several years.

CentOS ceased to be a RHEL clone with CentOS 7. There was a CentOS Linux 8 but it ended at the end of 2021. Now there is CentOS Stream Linux, and its versions are quite similar to the corresponding RHEL versions. But basically CentOS Stream has taken the role of Fedora, and Fedora still exists for, well, ... I'm not sure exactly what its role is. Even sketchier beta testing and development, I suppose. It makes Oracle Linux look even more attractive to me.

Well, RHEL 8 moved the goalposts much further out. Its kernel supports 57/52 bits of virtual/physical memory address, and does 5 levels of page tables. So, it could support up to 128 PiB of virtual address space and 4 PiB of physical memory.

With RHEL 8, Red Hat started emphasizing deployment in containers, in cloud settings, and as a virtualization host. The new Composer lets you created customized images in several formats, including those prepared for deployment onto public cloud providers.

Here are some Cockpit screenshots, note that it listens on TCP/9090: 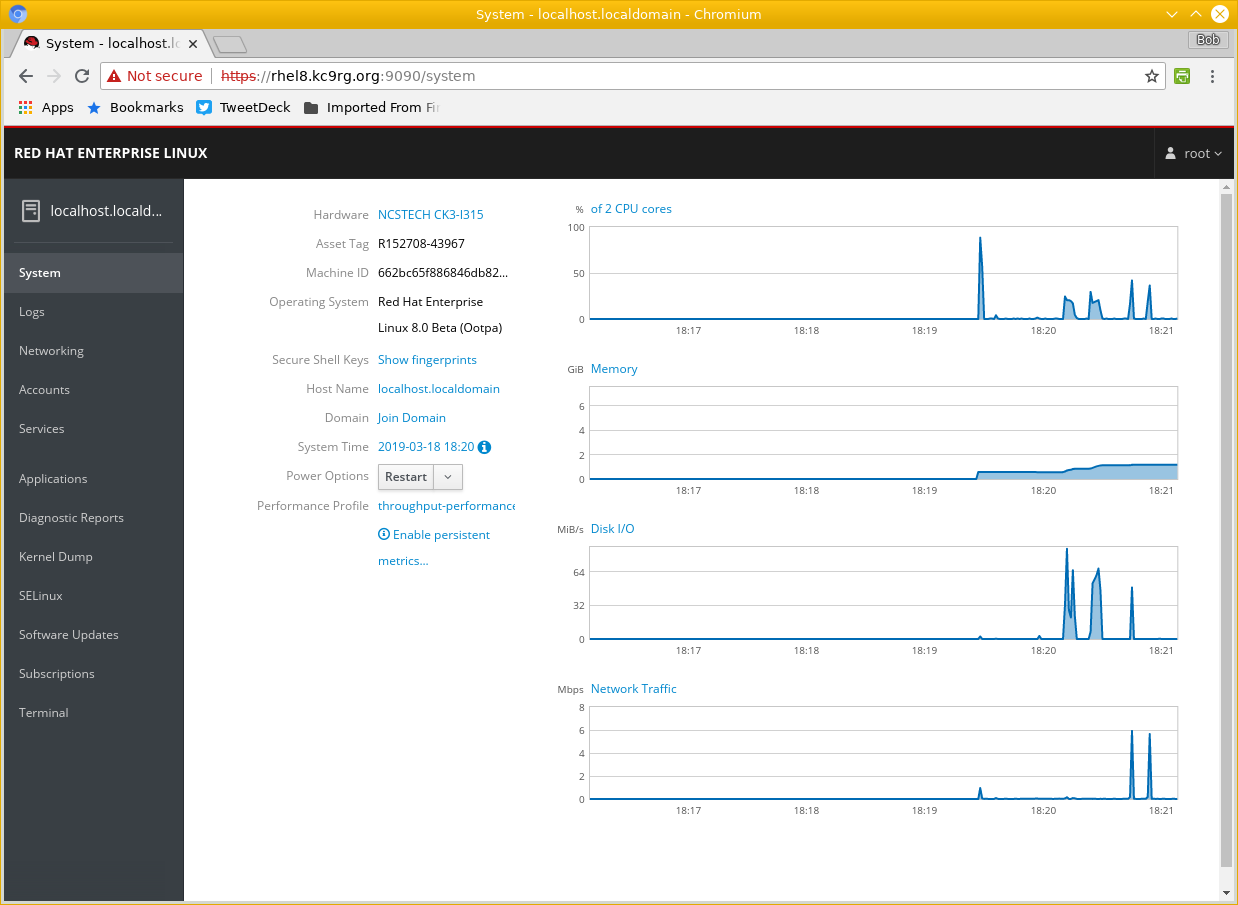 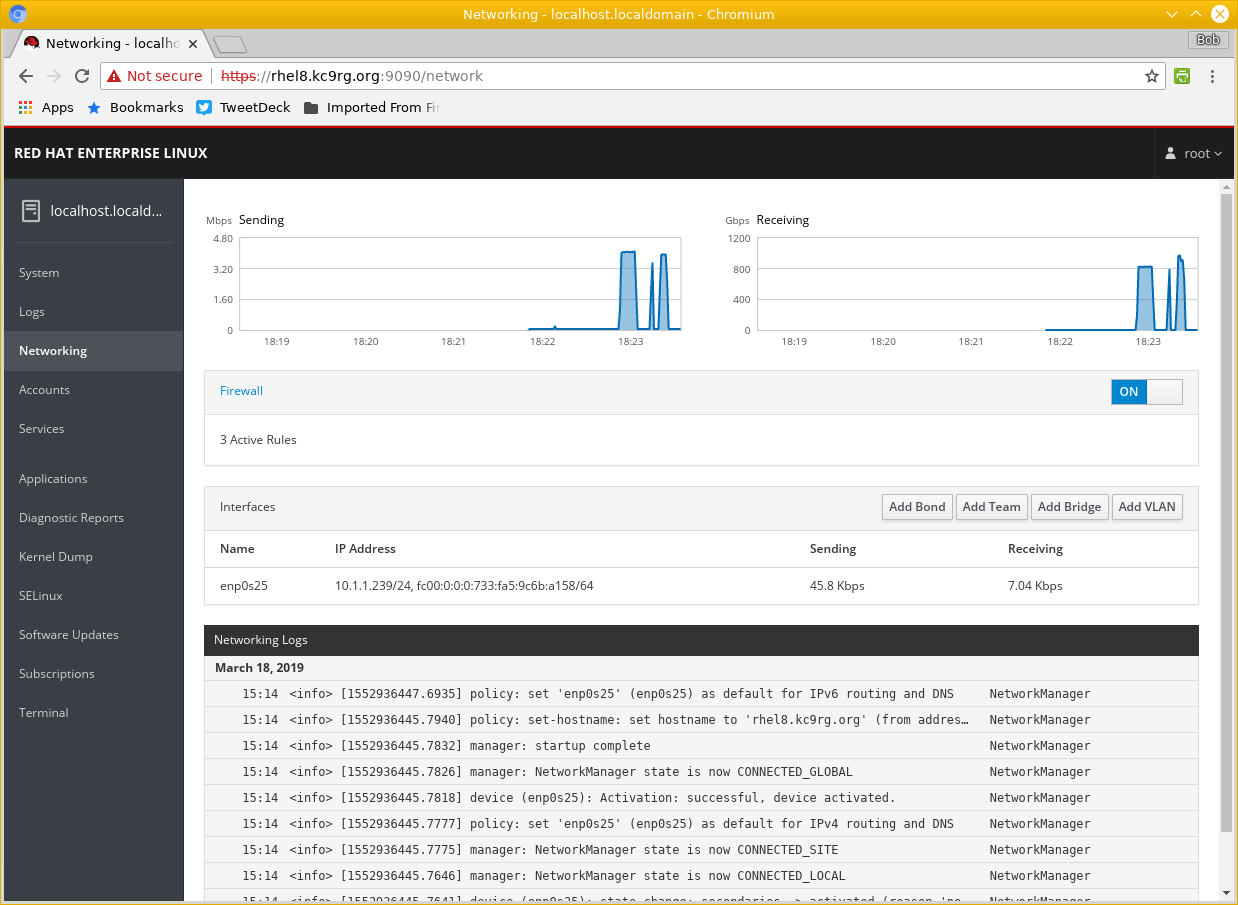 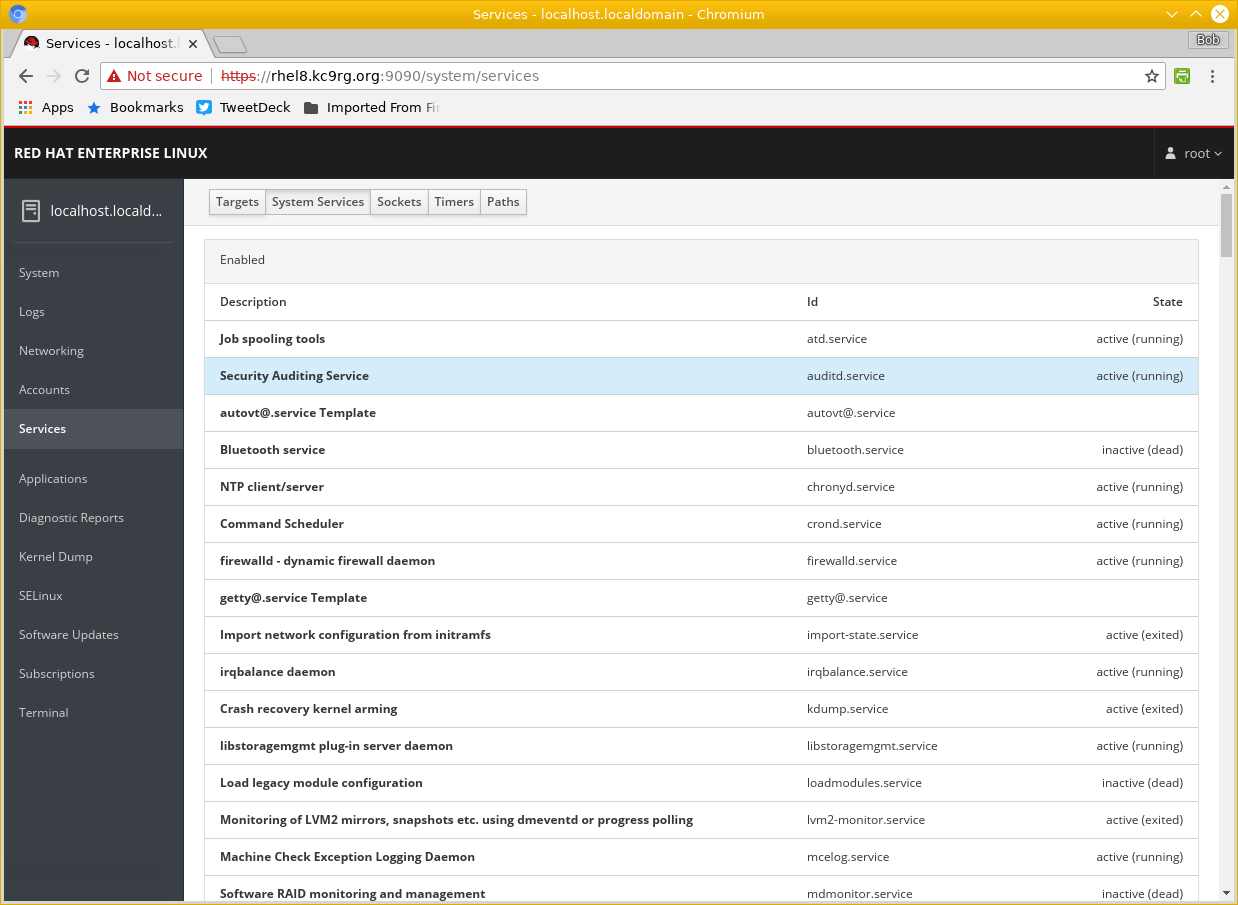 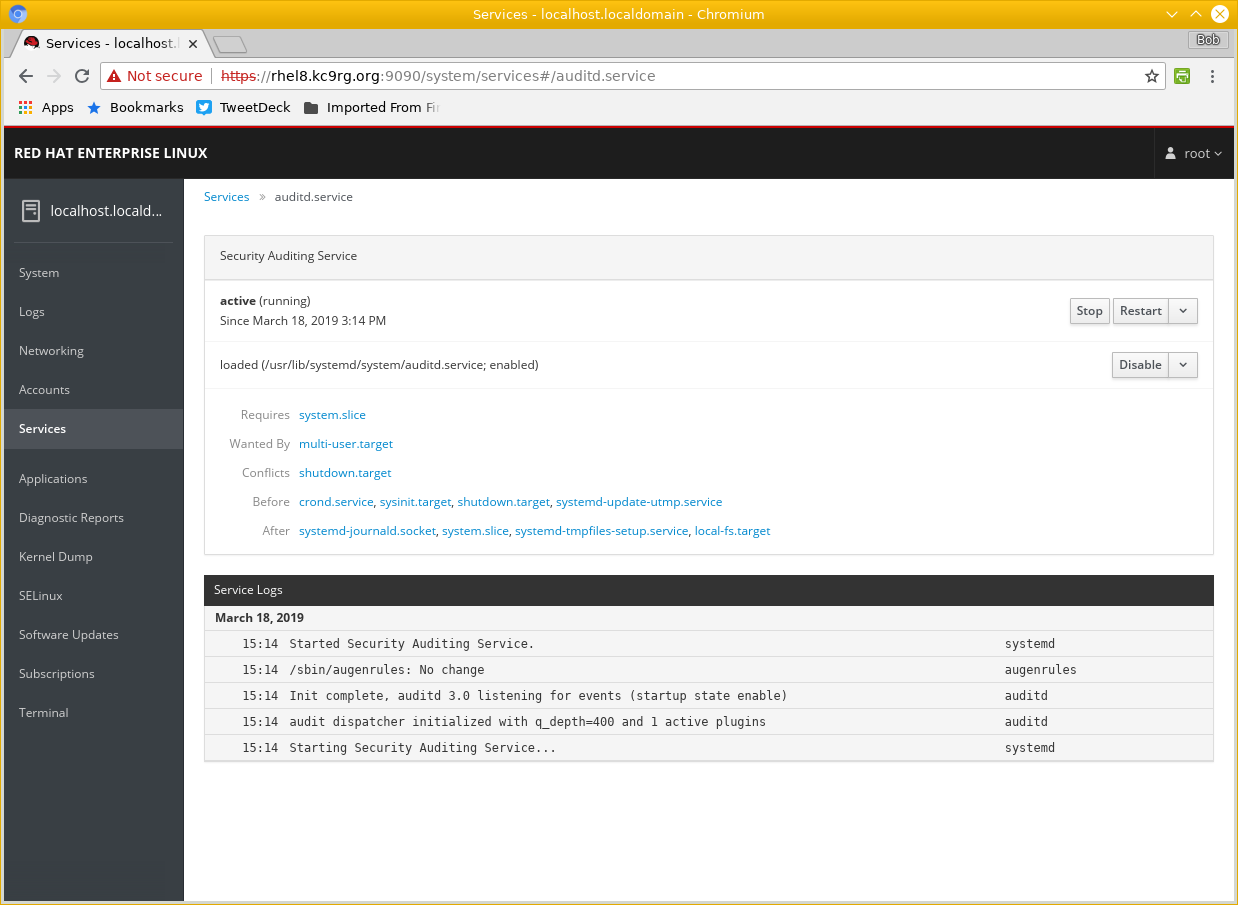 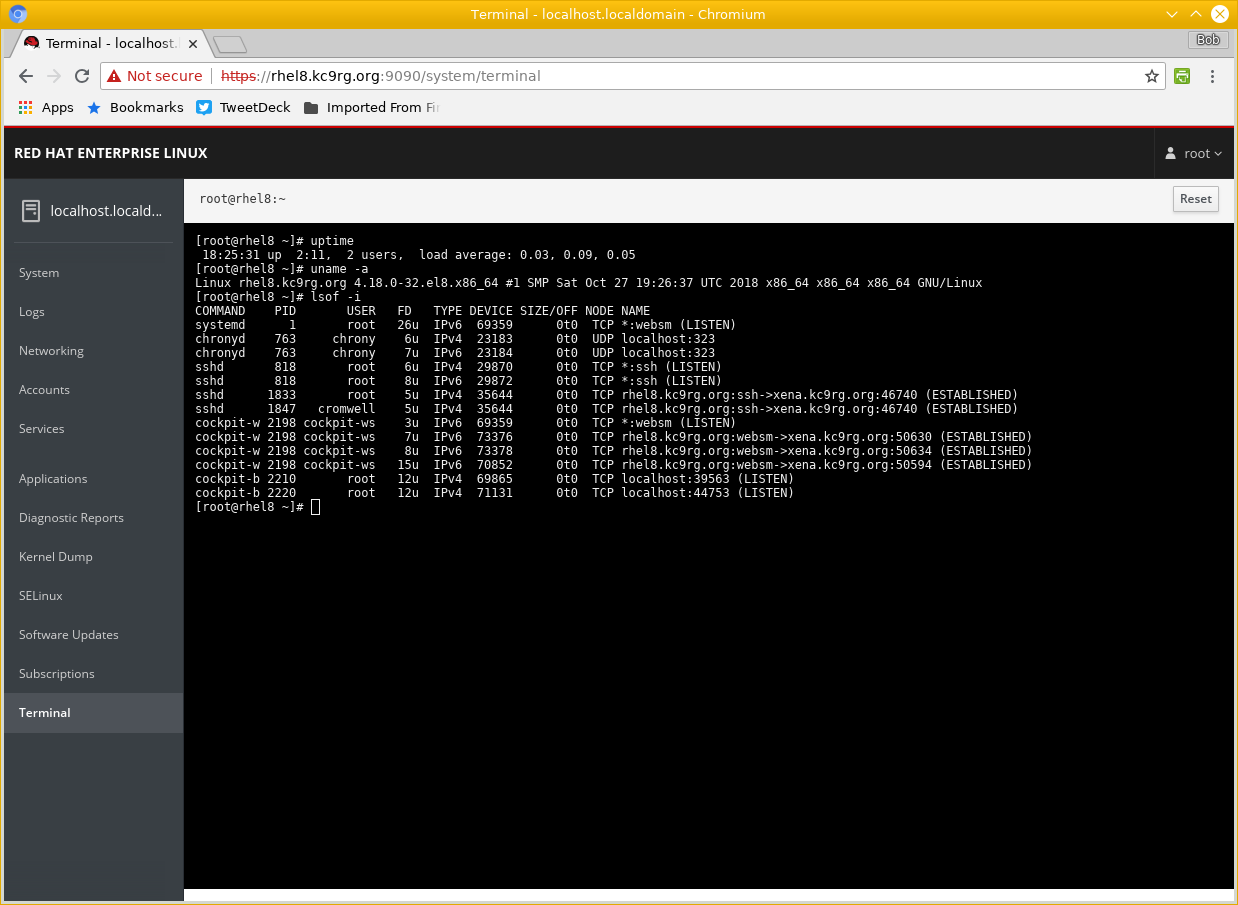 The commands and configuration files used to configure RHEL 7 were often completely different from RHEL 6. That didn't happen in going from RHEL 7 to 8 to 9. RHEL 8 and 9 seem to me to be about updating existing components.

The default user PATH environment variable has changed. To include an even earlier version to see how much it has changed:

No sbin components, so you had to remember to always add "-" or "-l" or "--login" to your su command so your following system administration commands work!

The Bash shell environment on RHEL 8 behaves strangely. It is case insensitive at times, and these two commands work differently:

The environment variables LANG, LC_ALL, and LOCALE are correctly (for me) set to en_US.utf8, C, and en_US.utf8, respectively, on RHEL/CentOS/Oracle Linux 7. However, on RHEL 8 and 9 only LANG are set. Fix: add a line to ~/.bash_profile:

The manual page indices always need to be rebuilt so man -k will work after the installation. There will be a cron job to do that, or you can do it manually. This had used the makewhatis utility, but with RHEL 7 mandb replaces makewhatis. The file /etc/cron.daily/man-db.cron makes this happen every night. With RHEL 8 it appears that this is enabled in /etc/sysconfig/man-db but there is no corresponding cron job. All the same, you get the indices. It seems that there is an hourly cron job, but I don't see signs of it.

Gnome is surprisingly resource-hungry. You will probably want to put autospawn = no in your ~/.pulse/client.conf file and also in /etc/skel. Otherwise pulseaudio will always run and always restart, and sometimes it will impose a surprising load on the CPU.

By RHEL 7 many more packages had moved to having one main configuration file plus a collection, like what xinetd had done for some time. For example, sudo puts its system-wide settings in /etc/sudoers and then reads all the user-specific files /etc/sudoers.d/*. Rsyslog reads /etc/rsyslog.conf and then all the files in /etc/rsyslog.d/*.

This is good, take advantage of it. The intent is that you don't touch the distribution-provided file /etc/*.conf. When the package updates, rpm discovers that the main configuration file is still in pristine form and you have no confusing *.rpmnew, *.rpmold, and so on to track down and manually merge changes. Let the distribution's provided configuration file do whatever they intended, and their your locally created files can override any system-wide settings you want to change.