A Walk to Takino Shrine

Nikkō had sacred sites at least 900 years before the beginning of the Tokugawa Shōgunate.

Shōdō Shonin was a monk born in the 700s, when the Imperial palace was at Nara, before the Imperial house moved in 794 to the newly built capital city of Kyōto. Shōdō founded the complex of temples now collectively called Rinnō-ji. He also founded the Futarasan Shintō shrine.

Shintō comes from prehistoric traditions, Buddhism arrived from China via Korea in 552 CE. Before long there was Shinbutsu-shūgō, the idea that a Shintō kami could manifest as a Buddhist bodhisattva (or bosatsu in Japanese).

A nice path north through the woods from Nikkō take us to some sites from that earlier time. Get a map from the tourist office along the main street northwest from the train stations.

The walk is especially atmospheric in wet weather, common in Nikkō.

The path runs parallel to a small road, but for the most part you'll be in the forest, well off the road.

Before long you come to the Kaisan-do temple, where the ashes of Shōdō Shonin are housed. The monk Kukai, who founded the mountaintop monastery complex of Koyasan, is said to have built Kaisan-do.

The Kannon-do, also called San-no-miya, is the Shrine of Safe and Easy Childbirth. People leave kyosha or prayer blocks, either asking for or giving thanks for an easy delivery.

The kyosha blocks are the shape of a Japanese chess piece called kyosha, which moves in straight lines like the rook in western chess. It's a metaphor for easy delivery, apparently.

Below is the tomb of Shōdō Shonin. Buddhist graves are typically marked with a gorintō, a Five-Ringed Tower, a stone form of pagoda.

The five segments of a gorintō may be labeled with Sanskrit letters in the Siddhaṃ script representing the Buddhist cosmology. These five elements form the body of the cosmic Buddha Mahāvairocana, our own bodies, and the physical world. Jewel-shape or Space at the top, cube or Earth at the bottom. The five elements plus wisdom make up the universe. The elements are not destroyed at death, and so it is possible to join with Mahāvairocana.

The Hotoke Iwa, literally "Buddha's Stones", is a cleft in the cliff face with six stone Buddha statues, called Rokubu-te.

The graves of three of Shōdō Shonin's disciples are nearby.

Continuing up the Path

Continuing on from the Kaisan-do complex, we soon pass another small shrine. As usual in Japan, this mixes the iconography of Shintō (the torii) and Buddhist (human statues).

This is the Kitano Shrine. Sugawara Michizane was a scholar of the Heian period, he lived 845-903. Regarded at the time as an excellent poet, today he is revered in Shintō as the god of learning, Tenman-Tenjin. This shrine was built in 1661.

There's a big stone across the path from the shrine that's believed to grant success in school work and handwriting if you touch it.

Continue through the forest, but do not relieve yourself. The Dai-shoben-kinzei-no-sekihi is a stone pillar beside the path. Its carved inscription tells visitors that they must not urinate or defecate as they are entering a holy place. Yes, this is featured at the Toilets of the World, despite being the opposite.

About 20 minutes walking north from Nikkō brings you to the Shiraito waterfall, whose name means "White-thread".

Follow the stone staircase just past the Shiraito waterfall to reach the entrance to Takino-o Shrine.

Kukai built the shrine in 820. The legend says that Kukai was following the path established by Shōdō Shonin, when he encountered the goddess enshrined at Nikkō's Futarasan Shine. He decided to build Takino-o Shrine in her honor. This shrine is said to have been the most popular destination for pilgrims before Tokugawa's Tōshō-gū shrine was built.

Taakino-o Shrine is famous for its unique stone torii called the Undameshi-no-Torii. Undameshi means "try luck". The upper archway has a small hole in it. Local folklore says that if you can throw a pebble through the hole then you'll be blessed with good fortune, but you only get three attempts.

Two torii lead to the Kodane Ishi (or Kodane Stone), believed to have the power to make someone pregnant.

It's a large fertility stone.

This shrine enshrines the Goddess of Water Mizuhanome Kami of the Niukawakami Jinjya in Higashi Yoshinomura, Yoshino-gun, Nara prefecture, who is the elder sister of the Sun God Amaterasu Omikami believed to be the creator of Japan.

The shrine was dedicated to the Goddess by Nobuo Yokokawa, ex-governor of Tochigi prefecture at Takatoku, Fujiwara-machi, Tochigi on 26th November, 1977, but due to the expansion of the prefectural road it was transfered to the present site in 1998.

Visitors come to the shrine to pray for Safety and Fortune.

Let's head back to Nikkō and see some more sights. 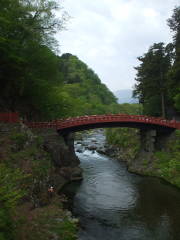 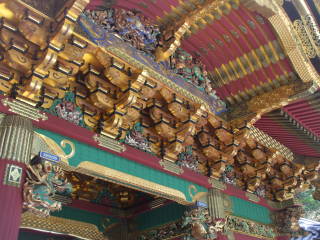 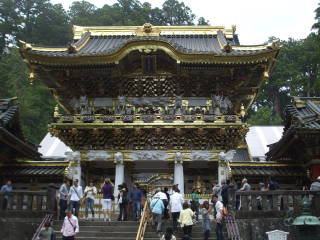 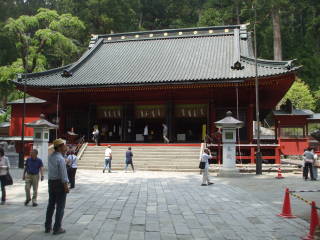 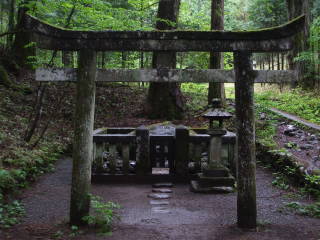 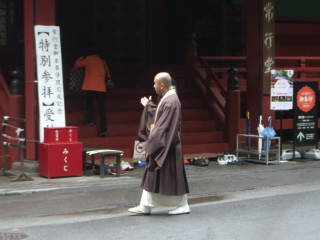 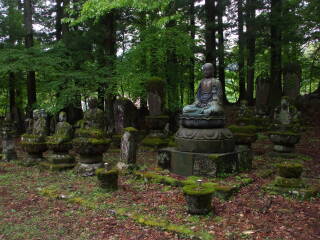